Machine Supply was a bookshop vending machine with residencies in various London locations including Google’s Campus building in Shoreditch, and the building lobby of publisher Hachette’s UK headquarters facing the Thames.

Books were stocked in the machine according to recommendations from readers. Machine Supply was internet-connected to a back-end website: each time a book was bought, it would automatically send a tweet. 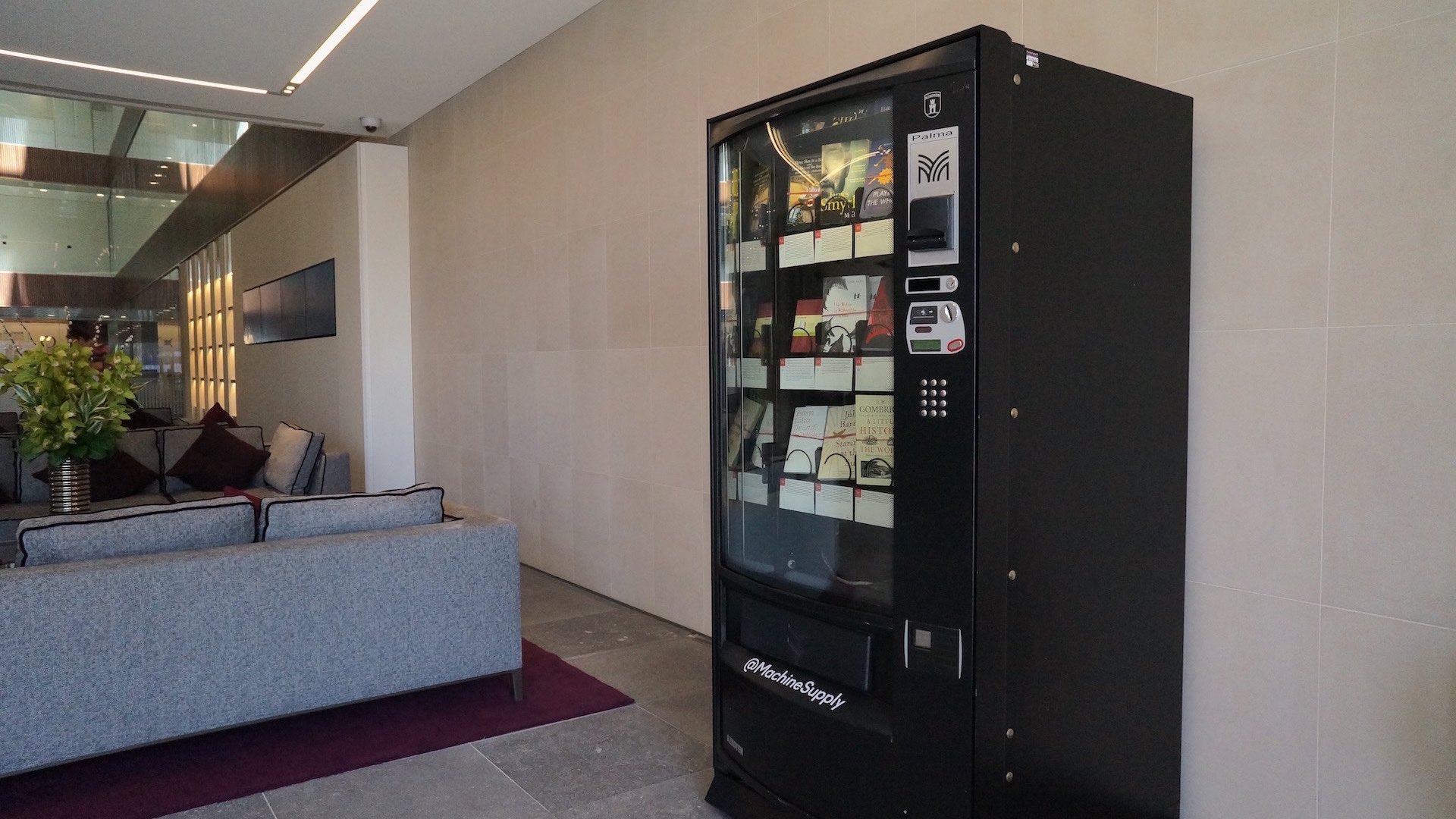 The bigger picture: e-commerce is efficient but it lacks the social component of shopping. Physical retail has always had serendipity and the joy of browsing, but it can lack immediacy, and lacks the analytics of online purchases. It should be possible to bridge the two.

Machine Supply was a self-initiated project to explore hardware, network, and retail, and to simply enjoy books. 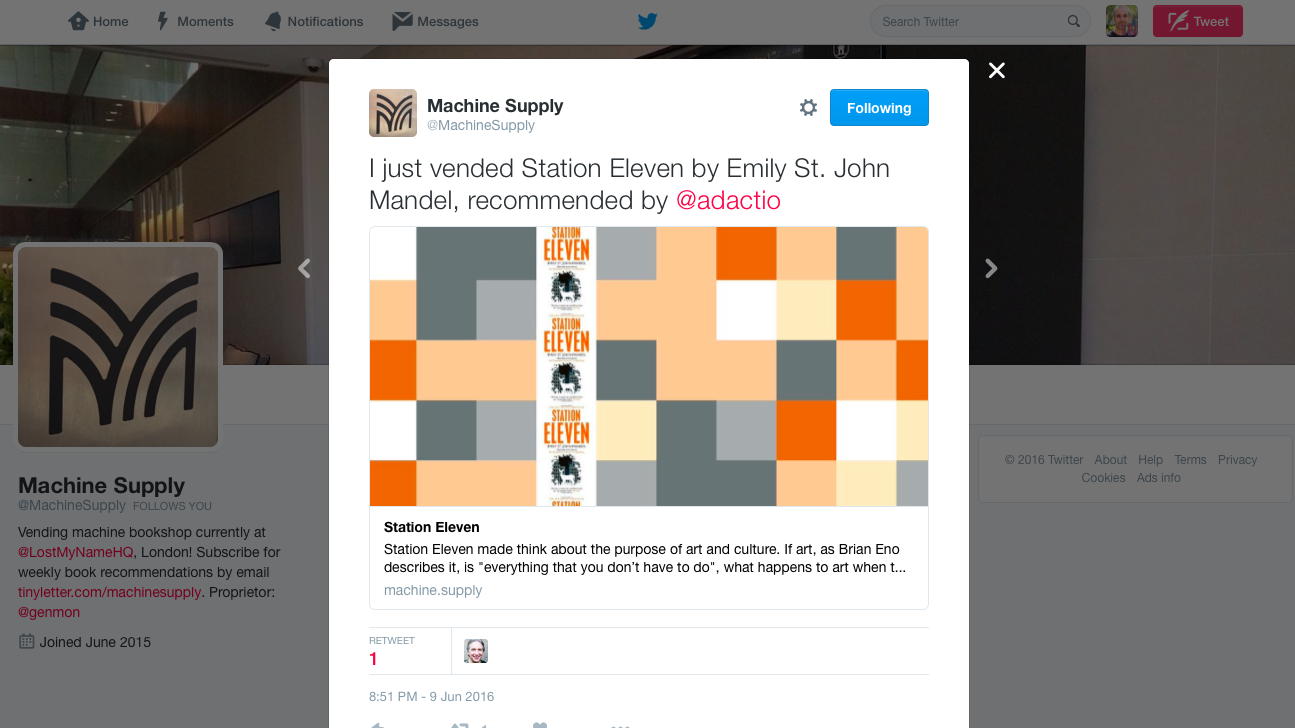 Tweets are decorated with a simple procedurally-generated graphic created from the book cover, and include a teaser of the recommendation.

Book recommendations are a gift.

You can get to know a person by listening to what they recommend, and what they highlight. And we all know that, so giving a recommendation is a generous and vulnerable act.

Internally, a vending machine is made out of components such as the note validator and the coin changer. These components speak to one-another in a standard protocol, a little like USB.

The most available standard is called “MDB” and the specification is several hundred pages long. It was standardised by Coca-Cola Japan in 1975 (for the purpose of adding vendor optionality into their supply chain). Because of its origin in Japan, MDB uses 9-bit bytes—almost unheard of in modern computing.

To interface with this, we developed a new vending machine component: we wrote software on a Raspberry Pi single board computer, and developed a custom PCB which bridged to the MDB protocol. The Raspberry Pi connected via Wi-Fi to the Machine Supply website which managed: 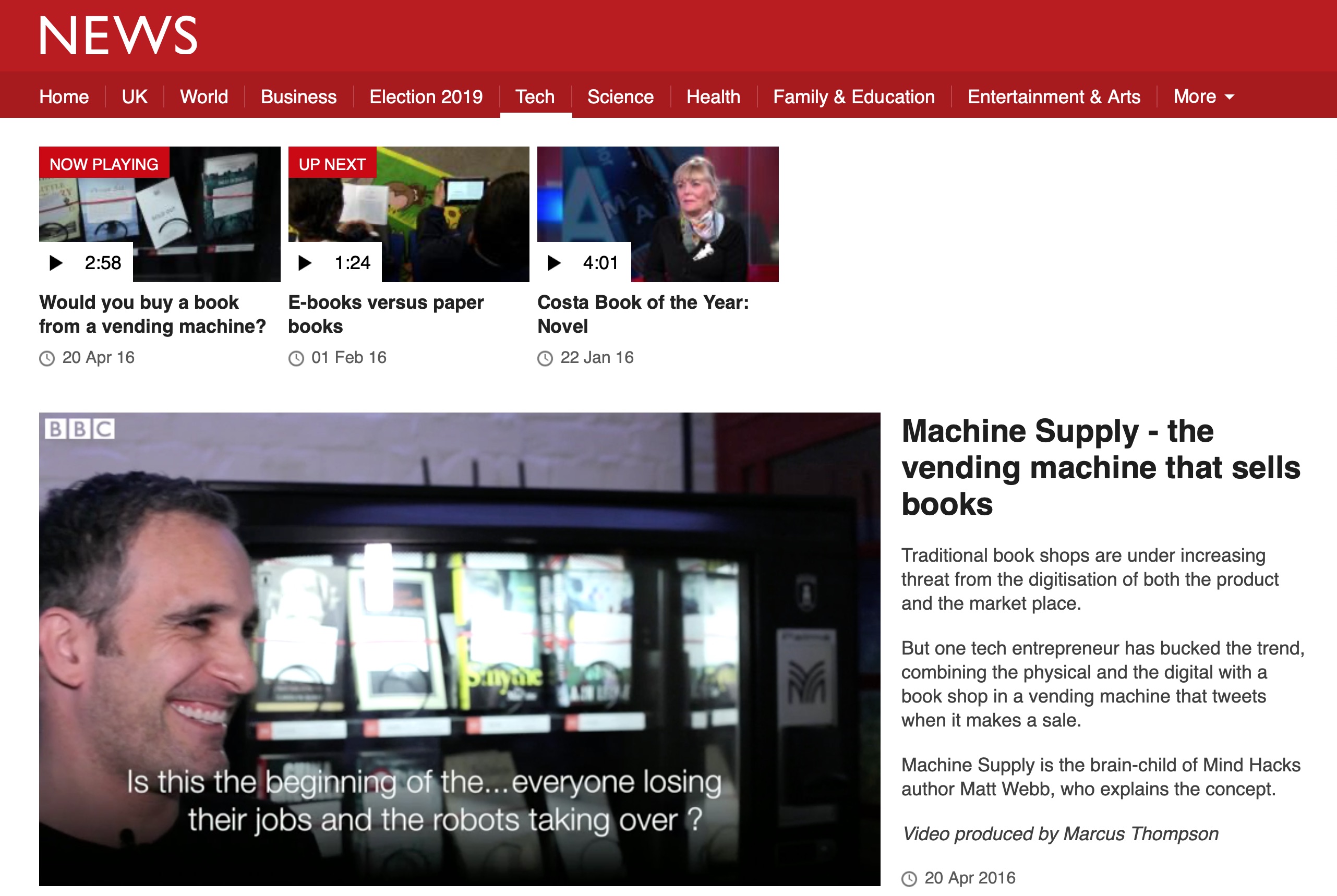 Machine Supply was covered by the BBC. 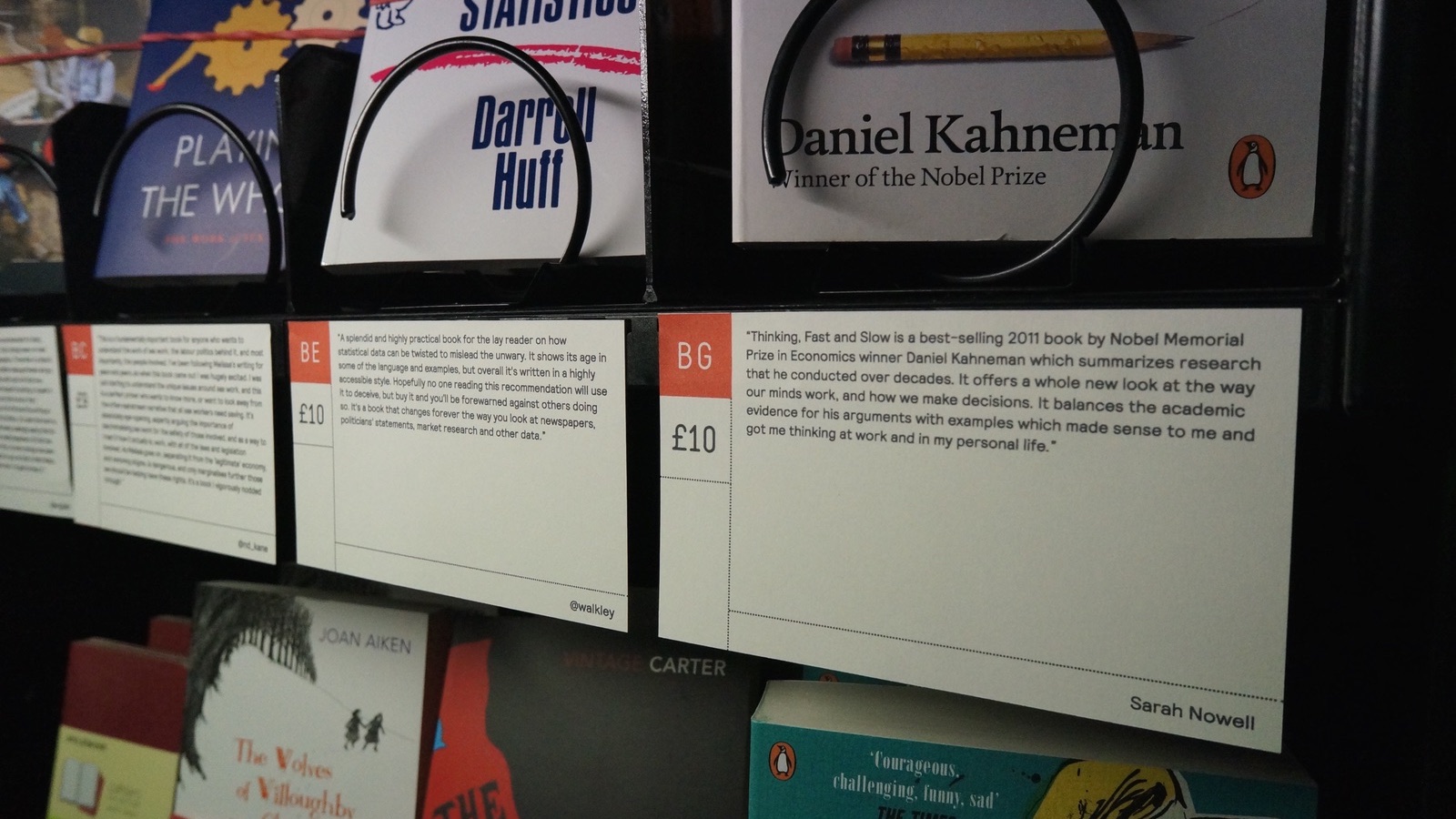 The world of atoms has some unusual challenges. 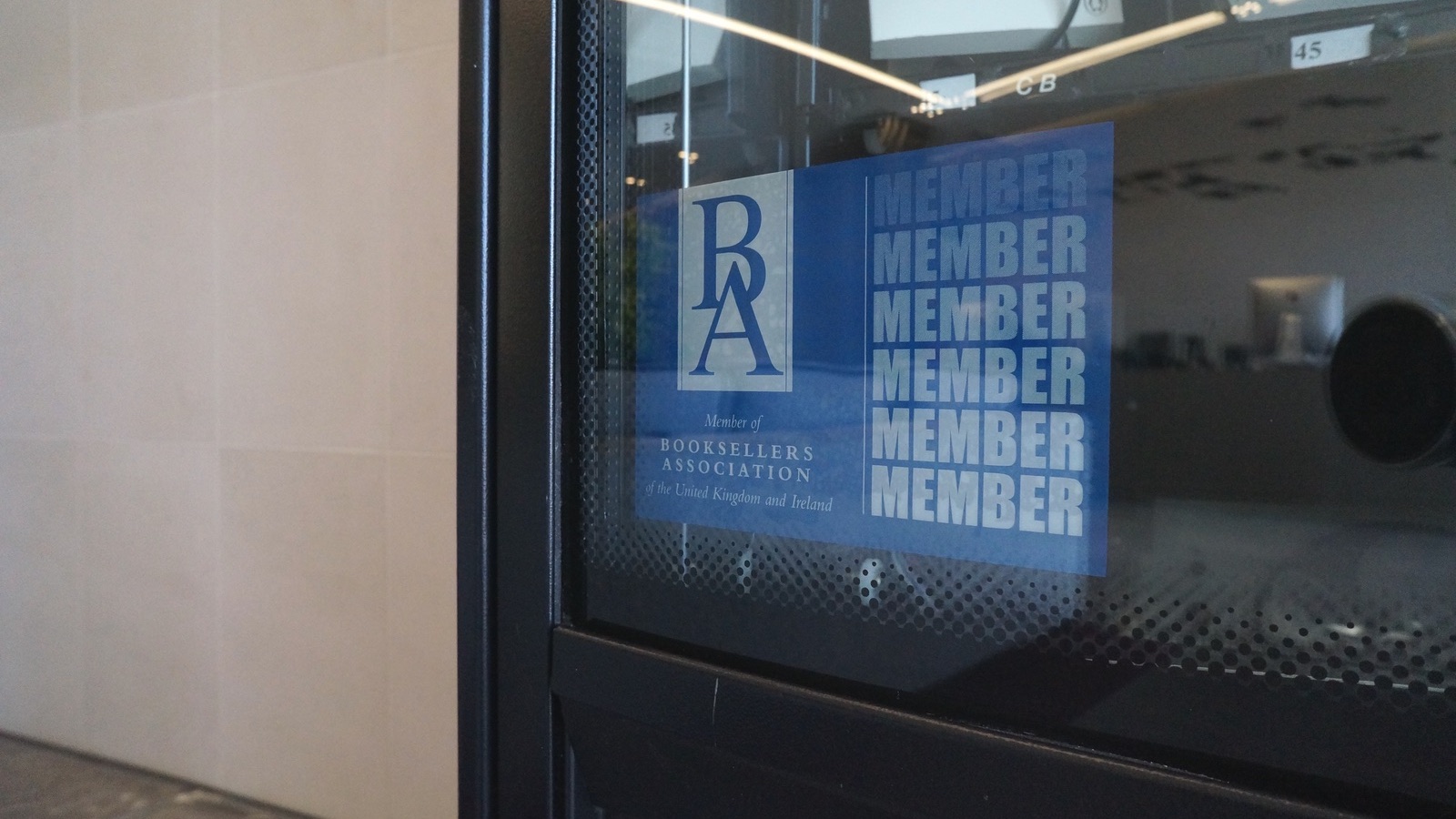 I am proud that Machine Supply was a member of the industry Booksellers Association in its own right, and I continue to be grateful for the support from the wholesalers who were able to supply stock — even at a low volume — with industry discounts. 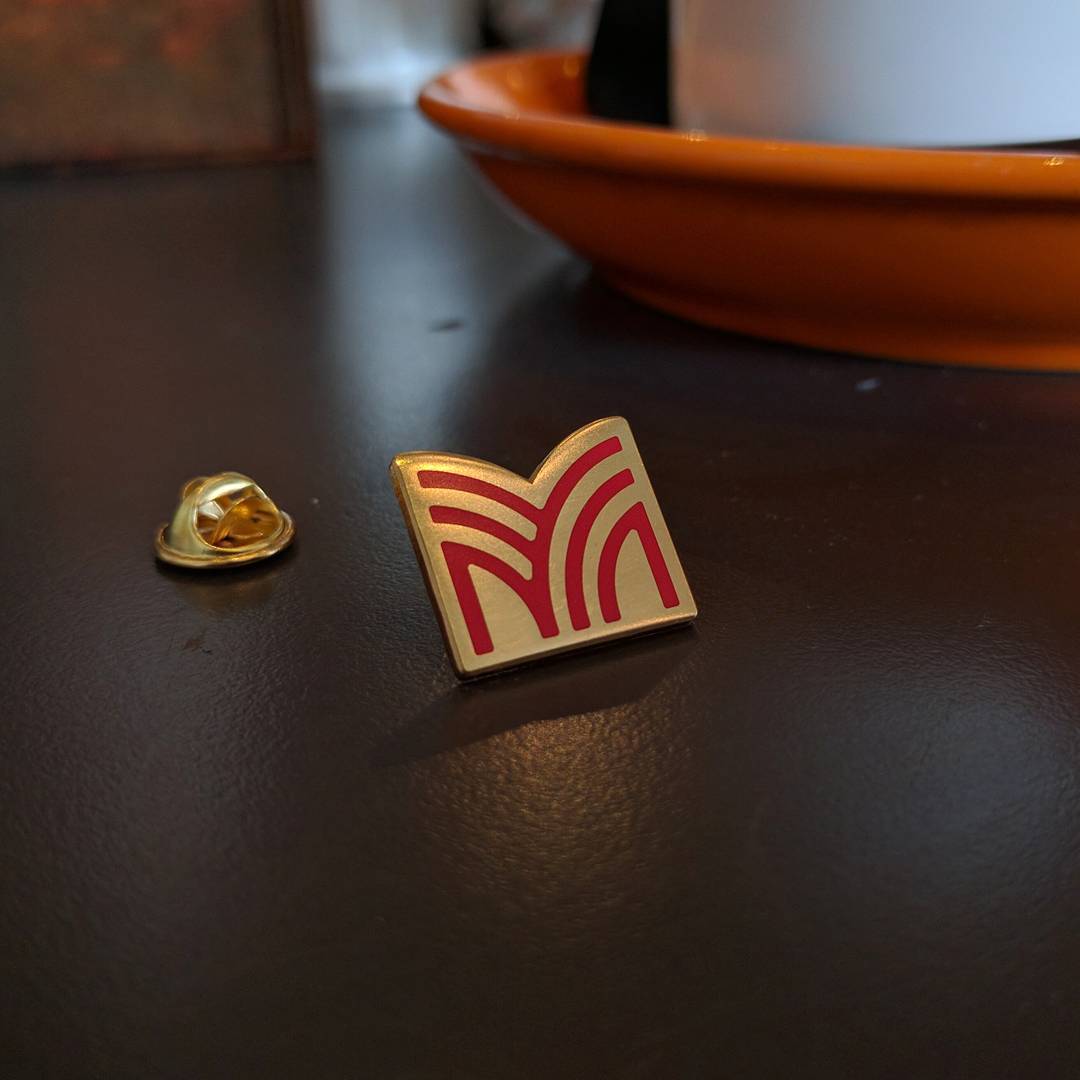 The beautiful logo, the graphic design of the shelf talkers, and the limited-edition enamel badge above are the product of the design studio Common Works.

The vending machine customisation and hardware development, including PCB development and production, was provided by Imglorious (now closed). 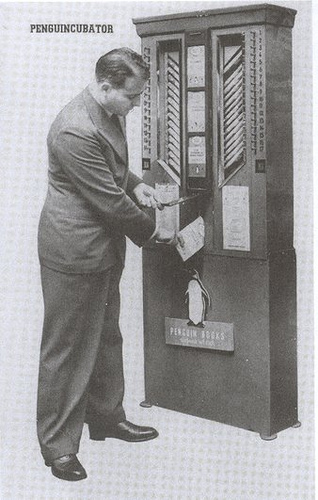 There is an interesting history to paperback books.

The publisher Penguin was launched in 1935 by Allen Lane. The story goes that he was in a train station in Devon and thought to himself there should be a book to buy there. He launched Penguin with ten books, including Agatha Christie’s “The Murder on the Links.”

Then Robert de Graff in 1939 in the US launched Pocket Books. He worked with magazine distributors to get books to readers.

Together these efforts launched paperbacks into a world. A new format, and newly affordable, but critically also with a new model of distribution: out of bookstores in cities and now alongside the magazines and periodicals, in wire racks at train stations.

The image above is the Penguincubator: the book vending machine launched by Allen Lane on Charing Cross Road in London, in 1937.